I started writing this race report in my head a few weeks before the race - I really wanted to start it with "I finally won a race!" If I visualized winning, it could happen. I've placed second the last 2 years and first seemed within reach. I'm usually much less ambitious - my top priorities are always racing smart (staying well fueled and hydrated, not getting lost, not falling, not dying) which means I should finish and might be fast, but I can only control my race and there's a entire field of faster women doing the same. Still, it seemed possible...

Oak Mountain is my favorite 50k - very low key, great well-stocked aid stations, beautiful views, fun & challenging trails, incredible volunteers, runnable sections, technical sections and a waterfall.  To start, someone yells "hey everyone, we're going to start soon.  If you think you're going to drop, let me know now.  Ok, go!"  The finish is a white, chalked line at a pavilion with grilled food, frozen fruit salad, and brownies.  Most people hang out eating, drinking, chatting, and cheering all the finishers on.  It's a great community!!

After the RD yelled "go," a guy took off like it was a track meet, not a 50k - most of us took the paved loop easy just chatting.  Seemed to work for him though as he killed it and won.  The climbing on the yellow trail begins right away.  This year, in addition to my usual race priorities, I had 2 plans I thought would help:  1) wear a trucker hat (worked for the woman who won Mount Mitchell Challenge, granted she's also placed in the top 10 at Western States, but hey, couldn't hurt) and 2) stay with local legend and my running idol on the early climbs and hopefully as long as possible.  I figured even if I went harder than I thought I should, I didn't want to lose time early.  That plan worked perfectly at first - except that 4 other women seemed to have the same plan.  So 5 of us were within seconds of each other for 4 or 5 miles.  We took turns leap frogging each other and then finally I was in the lead.  For maybe 30 seconds.  Then I got passed on an uphill by a woman and I couldn't match her pace.  By the next turn, she was out of sight.  Huh.  Well, it's a long race, alot can happen in the next 27 miles or so.

The next section is the blue trail - very runnable along a ridge and leads to the waterfall.  I love this section of the course!  I got to run with my friend Kerry - he was taking a bit of a risk as I was the one who lead us off course at Pine Mountain a few months earlier.  We were running well.  And then I got passed by another woman and couldn't match her pace.  By the time we reached the rocky decent to the waterfall, I started to take a wrong turn.  And got passed again.  As much as I wanted to win, it was more important to enjoy the day and keep running smart.  I caught up to the woman who had just passed me - she is ridiculously fast, but was doing her first race after a long time off.  She's super-nice and talented, and it was great to see her back on the trails - I wished I could have kept up with her!  She could set a CR at Oak Mountain, but unfortunately, took a wrong turn later in the day and DNFd.  I hated that for her, but she still had a great time and was happy to be running again.

Love Peavine Falls and the AS there - a few more miles was halfway...and then my brand new shoes with fewer than 20 miles on them started to fall apart.  Argh!!  Stopped to fix them, which let me catch my breath - and the local legend caught up to me as well so we got to run more together.  Time seemed to slow, but I remembered that I would see Holly at the next AS!  I did my best to pick up the pace and was happy to see her around 20 miles.  The encouraging words and ice were awesome!  I actually love the next section - it's a long jeep road climb that's tough either on a bike or running / walking.  By this time, temps were near 70 and it was sunny.  The climb has multiple water crossings - I stopped to splash in each one to keep myself cool.  I think it helped!!

Made it to Peavine falls AS for the second time - it's almost all downhill from there.  One of the volunteers was keeping track of runners and pace - his kind words gave me a boost as I left.  Only single digits left from here!  The last section of the race is the infamous "blood rock" trail from mountain biking.  I can't decide whether this trail is more fun to ride or run!  Closer to the finish, is a series of switch backs - super-fun for riding, but I was ready to be done at this point (partly because it was 70 and partly because the course is actually closer to 33 miles).  And then I saw the girl who passed me back at mile 5 - I felt bad pushing to catch her with only 2 miles left.  Finally, last switch back, then the bridge and white chalk line.  Done!  Just in time as it was getting HOT.

Old school finish - manual timing and finishers and times are recorded on a wipe board.  I was a few minutes slower than last year, but finished second again.  I felt like I ran well, no low spots and pushed it some, but I still have alot to learn about racing.  How do get faster?  Can I get faster?  Definitely, the strongest and smartest woman won the race - congrats to her!!  I'll keep running and visualizing have a good race - I might finish first one of these days, but as long as I cross the finish line with a smile and enjoy playing in the woods, I'll be happy. 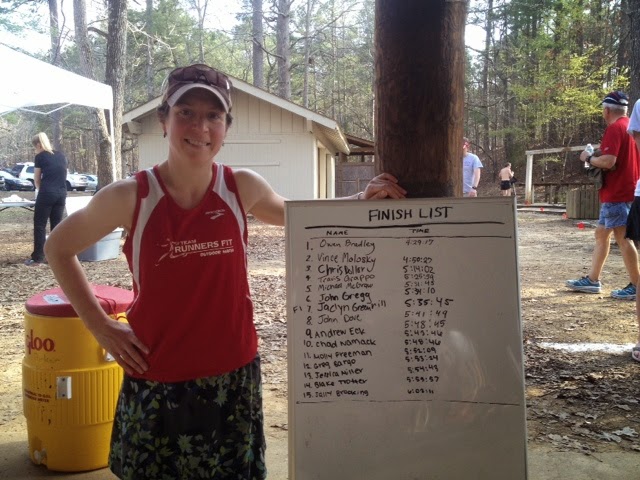