Finishing is winning.  Thanks for that nugget of wisdom, thumbs-up-Kate. :-)

This is not a race report with split times, race strategy, details about calorie consumption or gear choice.  It's about people and the wonderful, if not dysfunctional, extended family in this sport.

The race was a 1 mile out-and-back followed by 11 9 mile loops on (mostly) single track - I planned to borrow Holly's approach of dedicating each lap to someone.  This strategy would take on a new meaning when I learned about the tragic events in New Orleans the day before the race - AP, a beloved member of the running community, and his brother-in-law were riding their bikes when they were hit by a car.  His brother-in-law, Frank, did not survive and AP remains hospitalized (and continues to improve!).  Hearing about bike accidents never gets easier - I pray each time it's the last one. 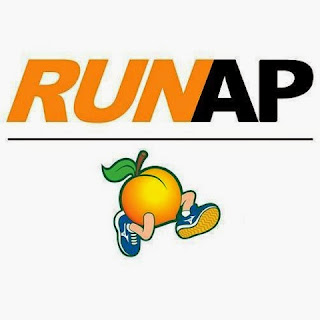 Each lap I had time to send thoughts and prayers out towards my friends.  I hope they felt a little warmth and kindness and a hug from the universe.  I also got to spend many miles of each lap running with old friends and new ones - this was a different experience from previous races and prior to the race, I did not appreciate the mental or emotional boost I would get from this. 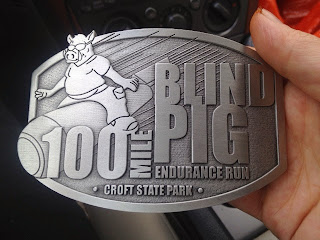 I had the pleasure of sharing laps 1 - 3 with Brad and our new best friend from Louisiana.  Jimmy works at sea for 30 days at a time - no one was happier to be on trails than he was after a looong month on a boat, confined to a treadmill.  He had great stories and is an honorary Yeti runner.  Deano and I ran lap 5 together - he is much faster than I am so this was a treat, as was chatting with his awesome wife Lisa between laps.  Thanks for the avocado soup!!  I shared a few miles with Sully, the genius behind the route.  Andy arrived later in the day and said he'd pace me at night.  Just because it was better than being at home alone.  And maybe he was procrastinating some school work too?!  I shared laps 9 - 11 with Andy and our new best friend Brian from Columbia (city not the country), who was running his first 100 miler.  Andy was in heaven - ebola AND helicopter stories.  His constant chatter kept us entertained and moving forward.  We talked alot about how we got into running and why we run - for many of us, we have small families or families that are spread out.  Dysfunctional though we may be at times, the ultra and trailrunning community is an extended family who I love dearly and appreciate more and more all the time.  Andy said it much more eloquently than that, even at 4am.

There are a million ways to procrastinate school work (and I've tried most of them) that don't involve staying up all night, running 100k, losing toenails, straining a hamstring, eating fig newtons and listening to stories about poo in exotic places - but this is just what Andy does.  And I and many others love him for that!  He paced Holly in December and ran with other runners at Blind Pig, helping as many people as he could - I truly felt honored and fortunate to share his company for hours.  It's a bond that he, Brian and I will always share.  I look forward to returning the favor someday soon!  THANK YOU ANDY!!! 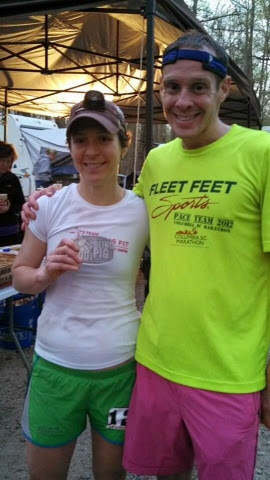 Other thoughts on this race...
* I wish I had a picture of the pig!  A stuffed pig was placed on the course and runners would pick it up and run with it before putting it in a new place.  It's small details like this that make a race unique and special!  Seeing a random stuffed pig in the middle of the woods at 2am is sure to put a smile on anyone's face.

* The runners were so incredibly encouraging of each other - there was a short section where runners going in and out would pass each other.  The woman who won always had a high five and "good job!" to share.  Another runner had a huge crew of supporters (go team LaLa!) with great fluorescent green Blind Pig shirts - they rang the cowbell for every runner.  They also paced numerous runners and volunteered.  Ray was awesome for just being Ray - and for having run 100 miles at Umstead the weekend before.  Viktor was a local legend who earned his very first buckle - he cleans up the trail as he runs, by kicking up sticks (wouldn't believe it if I hadn't witnessed it numerous times!) and by collecting trash.  He crossed the finish with a bag full of beer cans - definitely more beer cans than gu wrappers on the trail.  Thanks Viktor!  There were numerous other achievements - first 100 mile, fastest 100 miler, distance PR.  Each person had the opportunity to push themselves and find out what they were capable of.

* A special thanks goes out to the RD, Angela.  No one slept less than Angela that weekend - she was up early, stayed up all night for each of the finishers, personally handed out each buckle, thanked everyone and took pictures.  She was sincere, thoughtful, took care of little details, made sure we had a smorgasbord of food - the list goes on.  For example, there were a few water crossings - she placed sand bags so we could easily cross and keep our feet dry.  She knew 100 miles was tough enough - she didn't want runners to deal with wet feet too.  She was 100% committed to helping everyone finish and achieve their goals. THANK YOU ANGELA!!!

I haven't had post-race blues yet and I don't think I will - every time I think of this race, I smile and get a warm-fuzzy feeling thinking about all the wonderful people I'm blessed to have in my life.